Here's a small site, historypin.org, that allows you to place virtual markers at historic sites.
As part of a new collection called "Washington, DC - Native Places," the 1st pin is:

Previously used for farming by Native Indians, now the site of the Library of Congress buildings. 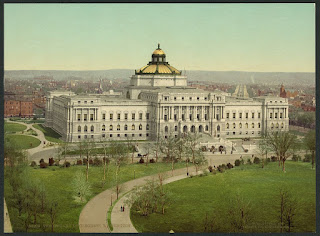 Thanks for the Supportive Comments & 1590 Village Drawing!

This has been a great week when supportive comments about establishing a Native Village Marker on Capitol Hill have been sent by the following folk:

My continued thanks to the Staff at the Library of Congress, both for Reference help and excellent identification of important maps!! 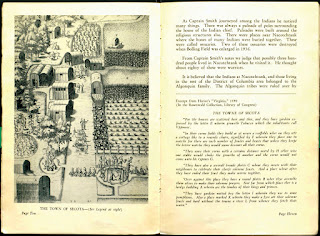 Above: 1590 drawing of an Indian Village (DC Indians used huts as shown, not teepees as on local maps)
From:
Lost arrows : the story of the Indians in the District of Columbia / adapted by Elizabeth W. Rounds from data furnished by Neil M. Judd ; edited by Cleveland Park Community Library Committee, Washington, D. C. 1948 DC Library call #: 970.4JUV 970.4

National Museum of the American Indian does a great job with the story of NY Indians.

Here's a link for the story of the Indians who once lived in Manhatten.
Too bad the story of DC Indians isn't told as well in DC!


The Lenape lived in Manahatta, now called Manhattan, prior to European contact. The word Lenape (len-AH-pay) means “the people” in their langu age. The Lenape spoke an Algonquian language, one of many families of languages in North America.  ....
Posted by Armand L at 7:39 PM No comments:

The Spring on Duddington Place Was an Important Spot For Natives 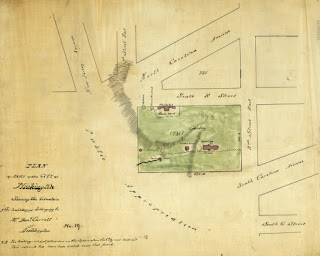 There was a spring on what is now Duddington Pl, SE, between 1st & 2nd Sts.  The natives used that water supply and so did the 1st builder in the area - Daniel Carroll of Duddington (1764-1849) put his house there. 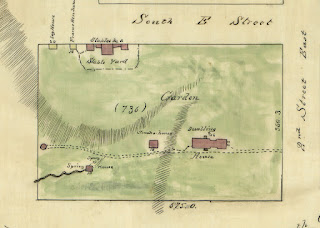 1889 Document Describing the Locations of Indian Villages in DC

"The Aborigines of the District of Columbia and the Lower Potomac" was published in 1889 in Vol 2 of American Anthropologist.  (The title should link to a pdf of the 51 page article.)

It contains the following descriptions of where Natives lived in the area that was to become Washington, DC.

p. 242,
"The principal part of Nacotchtanke seems to have been about due east of the Capitol, for the fields at this point give greater evidence of occupation than at most others, though indications of Indian occupation are to be found at nearly all points of the valley. "

p. 243
"The other village sites located within the old District lines and designated on the map (see Plate V) are (i) " Red Bank," on the west bank of the Anacostia and southeast of the Reform School; (2) the Carroll place in Washington, north of Garfield Park and between First and Second streets S. E...."

Here's part of the map that is included in the 1889 article.
(The main image for this blog is a simplified version of this map, source:


Development of the US Capital. Wash. GPA 1930 (71st Cong, 1st session, House Doc no. 35). This document is available at the Lib of Cong. It doesn't seem to discuss the Native History of the Capital.) 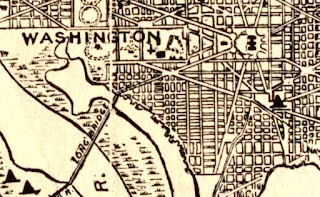 Email ThisBlogThis!Share to TwitterShare to FacebookShare to Pinterest
Labels: 1889, native village locations, The Aborigines of the District of Columbia and the Lower Potomac, Washington

Here's one site that offers a pronunciation of "Nacotchtank" - the tribe of Indians that lived on Capitol Hill in the centuries before European explorers arrived.

The tribe name got an A inserted in front and got applied to what we know as the "Anacostia" River. (You can see the Naco and the t sound at the end remaining in Anacostia.)

Please post any links that may offer a pronunciation that may be more authentic than this.

In Washington, DC, historic maps (see above) suggest that the dominant tribe that gave a derivative form of it's name to the Anacostia River, the Nacotchtank, had villages not far from the Capitol Building.

To the best of my knowledge, currently there is no public display that acknowledges the past existence of those villages.

Michelle Obama recently called attention to the forgotten history of black Americans in the building to this city. We would also do well to acknowledge the first peoples who lived here. The placement of a Native Village marker on Capitol Hill would be educational for local residents and visitors as well as provide evidence that we, as a city, acknowledge the Native people who enjoyed this land before us.

I have set up a blog to offer information this topic. My recent email to Kevin Gover, the Director of the National Museum of the American Indian, is also posted there. I also plan to send Congresswoman Norton information on this matter.

Please contact me if you or your staff would like more documentation - the Library of Congress has been a rich and readily available resource - and if you would like to discuss this matter in more detail.

Sincerely yours,
Armand
Posted by Armand L at 9:46 AM No comments:

The Nacotchtank tribe in DC - Wikipedia

The presence of the Nacotchtank in DC is clearly discussed in their wikipedia entry.
This is no secret.
We just don't talk about it or acknowledge it publicly in DC. 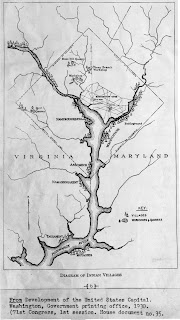 My time in Melbourne, AU has sensitized me to the issue of acknowledging the historic people who came before us. In Melbourne, each public meeting begins with mention of the indigenous people who originally occupied the land around the city.

As you may know, in Washington, DC, historic maps (see above) suggest that the dominant tribe that gave a derivative form of it's name to the Anacostia River, the Nacotchtanke, had villages not far from the Capitol Building. Ironically, the village locations are quite close to the American Indian Museum.

To the best of my knowledge, currently there is no public display that acknowledges the past existence of those villages.

Such a monument would be educational to local residents and visitors as well as provide evidence that we, as a city, acknowledge the Native people who enjoyed this land before us.

I am in the process of contacting key Washingtonians, such as yourself, who might be interested in pursuing the placement of a Native Village marker on Capitol Hill. In the near future I will also be contacting the Mayor and Congresswoman Norton to discuss this project.