In honor of NAHM, Ryan Williams, Digital Producer for DCPL, hosted a podcast with Ruth Trocolli, the State Archaeologist of Washington, DC, Chief Jesse James Swann of the Piscataway Conoy Tribe, and me, to talk about the Native artifacts that the Office of Historic Preservation now stores at the MLK building. In the podcast we discuss some of the many locations, including the White House, where Native artifacts have been found in the city, and Chief Swann shares the perspective of what the artifacts mean to the local Piscataways, who are the descendents of the artifact creators. 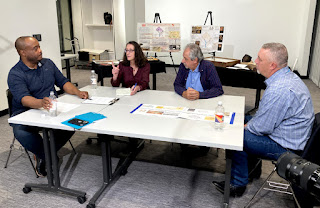 A 1666 Treaty between the colonists and the Piscataway and Anacostan tribes, among others, stated:

"The priviledge of hunting Crabbing fishing & fowleing shall be preserved to the Indians inviolably.”

When members of the DC City Council learned about this treaty, they passed a bill giving local Natives free fishing licenses. The first licenses were presented at a ceremony on Oct. 15, 2022.

This 2.20 min video tells the details of that story, in honor of Native American Heritage Day, 2022! 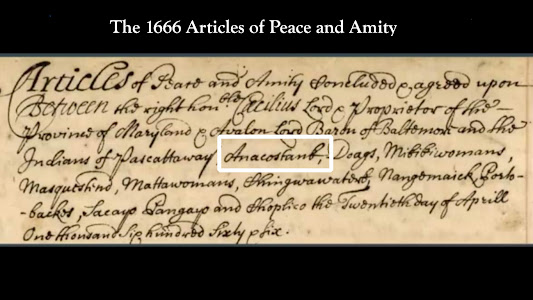 The Native Storage Pits Found at Fletcher's Boathouse in 1997

Archaeology done at Fletcher's Boathouse in 1997, before some parking lot construction, located more than 8 large Native storage pits. They seem to have been dug sequentially at roughly the same time, more than 2000 years ago. One theory for their use was that Natives travelling upriver, got to the falls on the Potomac, and stored their excess goods in the pits, before portaging their canoes upstream.

Yet another fascinating piece of DC Native History that goes untold at Fletchers and elsewhere in the city! 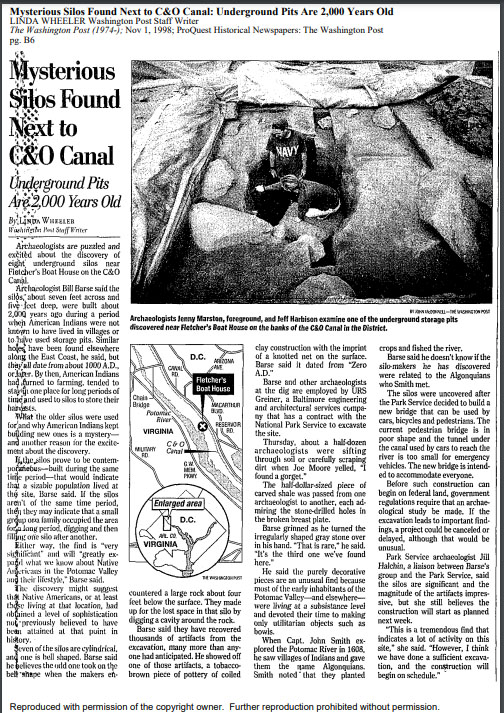 The Name of DC's Native Tribe – How “Anacostan” Grew Out of the Original Mistake, “Nacotchtanck.”

In the summer of 1608, when Captain John Smith and his mapmakers sailed up the Potomac to the area where Bolling Airforce Base now sits, they labeled the Piscataway tribe they found there, “Nacotchtanck.” 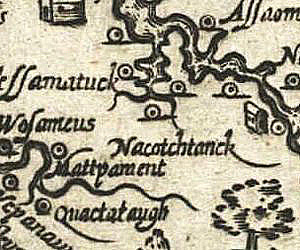 The proximity of this tribe to the confluence of a second river that joined with the Potomac (now “The Anacostia”) put them in a choice location to be traders, and the name Nacotchtanck was meant to mean “a town of traders.”

Within 20 years of the publication of Smith's map, Father Andrew White, who came to the colonies to convert the Natives along the Potomac in 1634, changed the name used for the tribe of traders by adding an “a” sound to beginning of the name. This led to a number of variations for the name among the other English settlers, but one of the most popular derivative forms became “Anacostan.”

White studied the Piscataway dialect of the Algonquin language, so he could preach in their native language. He noticed, as have other commentators after him (Burr, 1920; Tooker, 1894), that the word for “a town of traders,” would be "anaquashatanik" which is based on the Algonquin words, “anaquash,” meaning "to trade," and "tanik," indicating a town.

Public interest in the Native tribe of DC often starts with reference to Captain Smith's 1608 map, and it isn't hard to find citations online with the name “Nacotchtanck,” or a variation of that name, including the entry on Wikipedia (2022).

The current Wikipedia description of the origin of the Anacostan name seems to come from this statement by James Mooney in an important collection of 1899 articles on the First People of DC (Mooney, 1899):

"Nacochtank, which was the residence of a chief and contained eighty warriors, was the principal settlement within or adjoining the District. The Jesuits, who came out later with Lord Baltimore, latinized the name as Anacostan, whence we get Anacostia, the modern name of the Eastern Branch, at Washington, and of the post office at Uniontown, on its southeast bank, and perhaps also Analostan, the name of the island opposite Georgetown." p. 260.

Mooney's linguistic studies involved the Native languages of the Southwest, not Piscataway or other Algonquin languages. The one Jesuit who changed the name was Andrew White, described above. "Latinizing" the name was not his goal. In 1920, Burr gave a description of the origin of the name consistent with the Algonquin "town of traders" phrase "anaquash - tanik," made by Fr. Andrew White (Burr, 1920).

The 1894 article by Tooker, cited above, points out that Captain Smith never used the spelling from his map when he wrote about the tribe. He did use 5 other names: Nacotchtanke, Nacothtank, Nacotchtant, Nacotchtanks, and Necosts (Tooker, p. 391).

The error in the original name isn't surprising, since Algonquin languages do not have an alphabet, Smith's mapmakers couldn't just ask “how do you spell that?” Variations on the names of Native tribes are common. A 1787 document on the transcription of Native languages by English settlers includes a comment “almost every man who writes Indian words, spells them in a peculiar manner…” (Edwards, 1787).

Since the name “Anacostia” refers to a major neighborhood and river in Washington, DC, referring to its Native tribe as the Anacostans (Tayac, 2004) pulls together these names, and helps listeners understand their association.

Burr, Charles R. (1920). "A Brief History of Anacostia, Its Name, Origin and Progress". Records of the Columbia Historical Society, Washington, D.C. 23: 168.
Jonathan Edwards, Observations of the Language OF the Muhhekaneew Indians. Communicated to the Connecticut Society of Arts and Sciences (New Haven: Josiah Meigs, 1787
Mooney, James. “INDIAN TRIBES OF THE DISTRICT OF COLUMBIA.”. p. 259-266.
In "The Aborigines of the District of Columbia and the Lower
Potomac - A Symposium, under the Direction of the Vice President of Section D." American
Anthropologist 2, no. 3 (1889): 225-68. http://www.jstor.org/stable/658373.

(note: The wiki spelling is not the same as seen on the map. Anacostine is a variation of Anacostan, with an added “i”, which does not occur in any of the original forms of the name.)

Proudfit's 2nd Native Village - On the grounds of the US National Arboretum (Details!)

This is the portion of the 1973 application of the US National Arboretum for status as a National Historic Place: 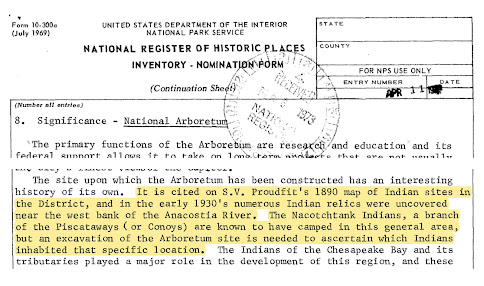 In 1934 a Civilian Conservation Corps camp was built at what was 28th & M Sts, which sat between what is now the lower Arboretum and the top of the Langston Golf Course. It was during their work that the artifacts mentioned above were found. Contacting DC Historic Preservation to locate those artifacts is an upcoming project!
This DC Historic sites page for the USNA also mentions the Piscataway, which would be the Anacostans:
https://historicsites.dcpreservation.org/items/show/407

“Most of the original, centuries-old forested landscape of the arboretum remains preserved, and evidence indicates that in past centuries the land housed Piscataway Native American habitations and, later, 19th century spring houses.”

The site in the Arboretum is about 1 mile from the Benning area on the east side of the Anacostia, where Proudfit did a lot of his collecting. It's reasonable to speculate that he did some searching on the west side of the Anacostia and found an assortment of artifacts that indicated a Native village on what is now Hickey Hill in the US National Arboretum. 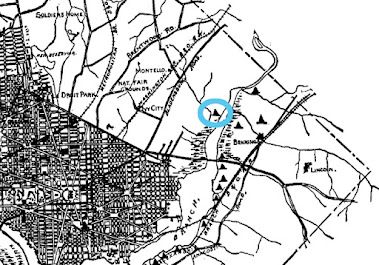 So this is another piece of DC Native History that has been available to the public for more than 50 years, but just not discussed.
I'll be contacting the US National Arboretum to see if we can get a public showing for the artifacts and the story of the Anacostans who once lived there.
To be continued...

In his 1899 article on Ancient Village Sites in Washington, DC, SV Proudfit said there were 2 sites. One was on the former Carroll Estate, the second "southeast of the Reform School on the Ancostia." 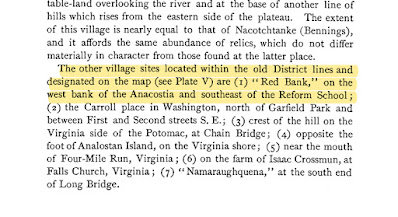 Here's how he marked it on his map: 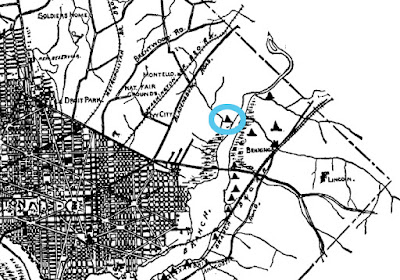 Based on the topographic maps from the late 1800s, there was a hill, Hickey Hill, around that spot. 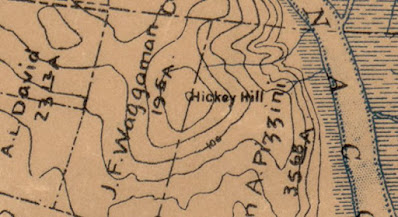 Over the years, the land in that area was farmed in various spots, but largely undeveloped until it was bought in the 1920s to create the US. National Arboretum.
Here's how the area from thia 1890s map corresponds to the current map of the US. National Arb.

During the last week, I've been trying to contact the person at the Arboretum, which is part of the Dept of Agriculture, who is responsible for the archaeology done there.
More details when I get them!
Posted by Armand L at 3:48 PM No comments:

NAHD 2021 Video: Where in Washington, DC Can You Learn about the History of its Native People, the Anacostans?

As a status report on the Native history of the Anacostans in DC, here is a 6 min. video that summarizes sites that exist in 2021. If any readers know of others, please be in touch!

Sorry to say, Maggie, but 100 years later, this is still true! 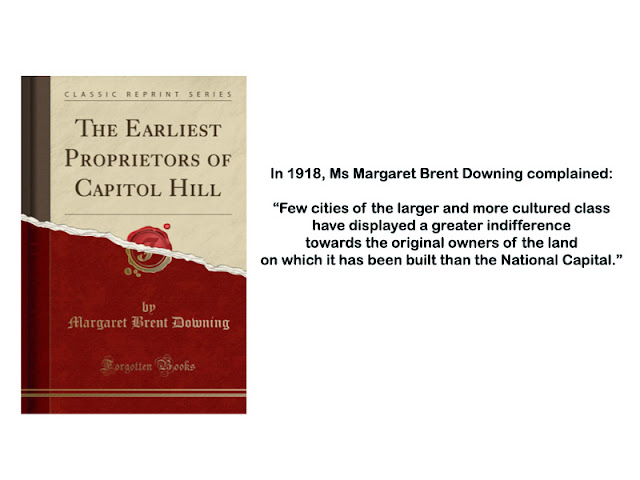